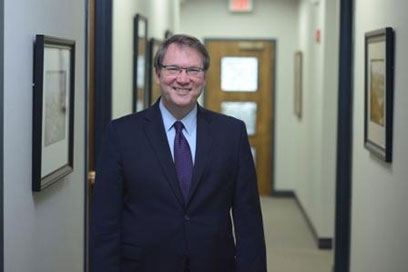 Bill is also the Chair of the Corporate & Business Department of the firm. Bill advises closely-held and family-owned businesses on capital formation, forms of business organization and related tax implications, mergers & acquisitions, employment matters, and shareholder disputes and has successfully navigated his clients through complex regulatory matters and litigation. Bill also negotiates license agreements on behalf of our technology clients. He is listed in the Best Lawyers in America® for Corporate Law and Business Organizations (including LLCs and Partnerships).

Bill is a native Pittsburgher who is very active in the community. He served on Allegheny County Council (representing District 12) and on Pittsburgh Mayor Bill Peduto’s Transition Team in 2013. His contributions to the community have been recognized by numerous organizations. He has been named a Fast Tracker by the Pittsburgh Business Times and recognized as one of Western Pennsylvania’s “Forty Under Forty” by Pittsburgh Magazine and the Pittsburgh Urban Magnet Project (PUMP). Bill was selected for inclusion in Best Lawyers Consumer Guide for Representation of Small Businesses by the Best Lawyers In America and a Pennsylvania Super Lawyer for his representation of closely-held businesses. He received the Presidential Excellence Award from the International Association of Lions Clubs and graduated from Leadership Pittsburgh XV in 1999. Additionally, he was named Outstanding Young Lawyer of the Year by the Allegheny County Bar Association in 1997.

Bill is a member of the Allegheny County Bar Association and was invited to become an Allegheny County Bar Foundation Fellow in 2004. He is also a member of the Pennsylvania Bar Association and the Association for Corporate Growth and has been called on to speak on such topics as succession planning, electronic commerce and internet legal considerations. He has also served as an instructor for the Veteran Entrepreneur Development Program at Robert Morris University.

Bill served on the Board of Trustees for Achieva, the largest non-profit organization in Western Pennsylvania serving adults and children with disabilities and their families, from 2008 until 2015. He served as Chair of the Board of Trustees from 2012-2014, during which time Achieva exceeded the goal of an ambitious capital campaign and was named non-profit of the year. Bill is President of the Lions Club of Downtown Pittsburgh. He is a former member of the Board of Directors for Mothers Against Drunk Driving of Allegheny/Westmoreland/Beaver Counties, for which he served as President from 1997-99. He has also served as an advisor for PowerLink and on its Board of Directors from 1997-99.

Bill currently serves on the Advisory Board of the Indiana University of Pennsylvania (IUP) Center for Family Business and as Chair of the Board of Trustees for Seton-La Salle Catholic High School. He is a member of the Notre Dame Club of Pittsburgh. He volunteers for numerous other community groups and non-profit organizations when the opportunity to do so arises.

Bill received his B.B.A. from The University of Notre Dame in 1984 and his J.D.,cum laude, from the University of Pittsburgh School of Law in 1990. He served on the Editorial Board for the Journal of Law and Commerce from 1989-90.