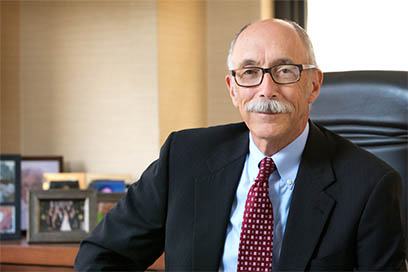 Stephen Jordan has built an extensive labor law, mediation, employment, and arbitration practice during his tenure with Rothman Gordon. He provides counsel to numerous local unions in Western Pennsylvania on collective bargaining, labor arbitration, and contract administration matters in both the public and private sectors. Steve has extensive experience in the representation of professional, para-professional, and non-professional employees in public and private schools, as well as in higher education. Steve also works with executives on a variety of aspects of employment law such as termination, severance negotiation, and executive compensation. Steve is a Mediator and Early Neutral Evaluator for the U.S. District Court for the Western District of Pennsylvania in conjunction with its Alternative Dispute Resolution Program, and a Mediator on the American Arbitration Association’s Panel of Mediators. Steve also serves as an arbitrator of labor and employment disputes and is appointed to the American Arbitration Association’s Employment Arbitration Panel, and its National Roster for Non-Binding Employment Arbitration; to the panel of arbitrators maintained by the Arbitration and Mediation Service; and to the roster of arbitrators administered by the Pennsylvania Bureau of Mediation, Department of Labor and Industry.

Steve has been selected by his peers to The Best Lawyers In America® from 1991 to the present, and in 2013, he was named Best Lawyers “Lawyer of the Year – Employment Law” for Pittsburgh. He was named to the 2003-2004 edition of Chambers USA Guide to the Legal Profession, and has been named a Pennsylvania Super Lawyer since its inception and was listed as one of the top 50 Pittsburgh Super Lawyers in 2005, 2006 and 2007. Steve was listed in the Lawdragon 500 Leading Plaintiff Employment Lawyers guides for 2020-22.  He is also rated AV® Preeeminet™ by Martindale-Hubbell. For three terms, Steve served on the Executive Committee of the firm.

Steve is a past Board Member of the Jewish Family and Community Services, serving on its Personnel Committee; the Jewish Community Center of Greater Pittsburgh; the Board of Trustees of Community Day School; and past Secretary of the Jewish Education Institute.