Employment discrimination based on political affiliation

Can an employer use political affiliation with a party or movement as grounds for termination?

Freedom of ideas and freedom of expression are central to American society. Political expression and political affiliation is the hard-earned right of every American citizen.

For public and private employers, however, there may not be a desire to have politics discussed at work. The balance between an American’s right to freedom of expression and free market principles can intersect when an employee’s political activities may prove incendiary to customers, coworkers and management. It leads to the question, not easily answered: Can an employee be fired for expressing political views? 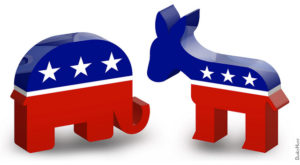 State employees have certain constitutional rights to not be fired for political affiliation. In Pennsylvania, for example, a public employee who proves that an employer took adverse employment action because of political affiliation can file a lawsuit for wrongful discharge. In order to be successful, the employee (the plaintiff) must show that:

This protection is offered through the First Amendment of the U.S. Constitution. Later case law has upheld this constitutional right for public employees in Pennsylvania (for example, the landmark 2002 case Goodman v. Pennsylvania Turnpike Commission). Government employees who are fired because of political belief therefore can sue their employer to obtain backpay and reinstatement to the position.

For private employees, the issue is less clear-cut. Private employers cannot discriminate against applicants and employees based on a protected class, such as race. Otherwise, in an at-will employment contract, employers have a wide latitude to end an employment contract for any reason, so long as it is not specifically prohibited by state or federal law. Political affiliation isn’t a protected class under Title VII of the Civil Rights Act. However, if an employer has a blanket rule to not hire anyone with a certain political affiliation, it could have the effect of violating the Civil Rights Act since certain race, national origins, or gender could have a closer affiliation to a political cause.

In addition, employees can have contractual protections, such as under a company handbook, which prevents discharge based on political activities of the employee.

Employees who believe they have experienced discrimination in the workplace, wrongful termination, or otherwise had their rights violated should contact Rothman Gordon online or call at (412) 338-1195 to discuss their legal options, including potential reimbursement or reinstatement to their position.